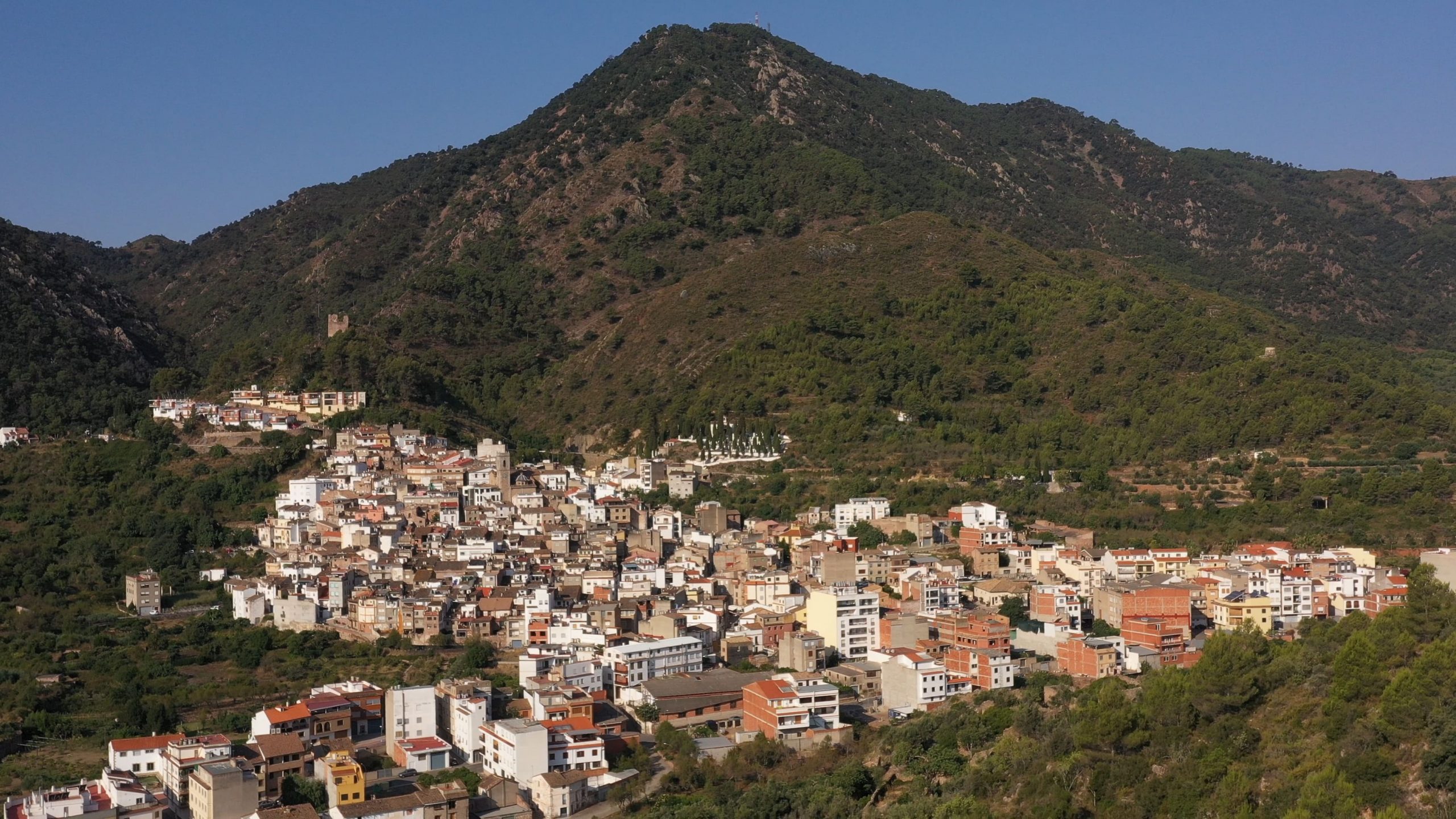 Eslida is a town that stands 381 metres above sea level in the very heart of the Sierra de Espadán Natural Park; set at the bottom of the majestic Puntal de l’Aljub (949 m), it is located in the foothills of its Muslim castle.
Its fascinating orography includes lush forests of pine trees and cork oaks, and also comprises impressive peaks such as La Costera, Tarraguán, El Puntal de l’Aljub, Fonillet, El Batalla and Cocons. In a small valley in which the Anna river, flanked by several steep ravines, is the main watercourse, visitors are still able to appreciate the intense agricultural activity and terracing that the area has been subjected for more than a millennium.

Sant Josep Spring. The Sant Josep spring is located at the foot of Penya Miró. It has 3 low-flow tributaries. Its waters have organoleptic properties. It drains into the rocky area. There is a picnic area by the spring.

Les Fosques Spring. This is the town’s most prestigious and best-known spring. It has 6 tributaries. The waters are believed to offer mineral and medicinal benefits for the treatments of kidney ailments. They have low levels of mineral salt and therefore facilitate diuresis. The spring is reached along the Carretera de Aín road. After crossing the bridge that passes over the Oret ravine and La Rambla, you can climb up to the Les Fosques natural spot along a concrete track.

El Fonillet Spring. Standing at 527 metres above sea level, El Fonillet is an aquifer spring with little underground flow and minimal contact with the ground, with these explaining why its waters contains such a low mineral content. They are notable for their diuretic properties. The spring drains into its sandstone banks. It is immersed in a peaceful and beautiful natural landscape. The area itself it beautiful, with low stone walls separating small sections containing tall pine trees and cork oaks. In 1936, there was a plan to build a sanctuary for tuberculosis patients on this site.

Matilde Spring. There are two springs: one in the lower part, where very little water flows from (Gregori spring); and another nearby which is more abundant. It is a light and pleasant-tasting water. It drains into the rocky area. There are cooking stations and picnic tables alongside the small Chóvar ravine. There are three ways of getting there: from the road that lies between Eslida and Artana; from the road from Eslida to Chóvar; and from the town itself, along the ancient Camino de Alfetx (also known as the Camino dels Caminets).

Castro Spring. The Castro spring is found alongside the ravine of the same name. It only flows when it rains, and the water is notable for its cool temperatures (12º C). The spring drains into its sandstone banks. It is reached along the road that connects Eslida to Artana. Around 500 metres outside the town, you will need to take a tarmacked track that crosses the Castro ravine and then splits into two. To reach the spring, you’ll need to head left at this fork.

Les Escaletes Spring. This spring is located in Ombria de l’Oret. It has one tributary whose flow is dependent on the amount of rainfall in autumn and spring..

This castle, which is perched atop a cliff, presides over the town of Eslida. Nowadays, all that is left are remains of the double walled enclosure and the homage tower. This tower, the only one which is visible from afar, is a triangular-shaped construction with cubes at the apexes (along with that of the La Mola castle in Novelda, they are the only examples of Muslim towers with triangular floor plans in the Valencian Community). It has recently been acquired by the Eslida Town Hall, and a plan currently being drawn up for its recovery and consolidation. You can just about make out the Mediterranean from the top of the watchtower.
In Medieval times, the construction that we now know as the Molí d’Aire served as an additional tower. This was located on a nearby mound that monitored access through the Oret ravine.

The current structure dates back to its extension in 1750, in which it was remodelled in a Baroque style. However, it seems that by 1430 the construction of a Christian church had already begun on a site just one metre away from the mosque, since the small chapel in the castle was already dilapidated by that point.
The church is therefore not built directly upon the old mosque, but right besides it in the main public square.

Eslida has various aqueducts across its different ravines and canal networks, with the scarcity of irrigation water forcing the 17th and 18th century settlers to find a way to make the most of the water they had in the cultivated land on both sides of the watercourses. These aqueducts tend to have a maximum of one or two arches.
The aqueduct that crosses the Anna river, also known as the La Rambla aqueduct, has a different historical background. It is believed to date back to some point in the Middle Ages, and was constructed by Muslims who sought to find a way of carrying the abundant water from the public fountain to the orchard in the village of Almoxarca and, possibly, to the public washhouses. This aqueduct, which has been rebuilt several times throughout its history, has as many as five arches or eyes.

This chapel, which is dedicated to the Santísimo Cristo del Calvario, was inaugurated in 1722 as a simple Christian chapel designed in a rural baroque style. Over the years, it has been subject to various extensions and decorative changes. The chapel is reached by following the Stations of the Cross, which also dates back to the early 18th century and was remodelled in the 1950s. Attached to the chapel is a cistern with a ceramic altarpiece dedicated to the Virgen de la Cueva Santa, which is widely worshipped in the neighbouring region of Alto Palancia.
During the recent restoration project of the chapel’s interior, the remains of ancient decorations were uncovered. These are now on display to the public.

This is an ancient wind-powered cereal mill which dates back to the mid-19th century. The mill was possibly built on top of one of Eslida Castle’s old auxiliary towers, which once served to monitor access through the Oret ravine. After falling into disuse, it was later converted into a windmill; a structure which is not commonly found in the Sierra de Espadán.
At the foot of this construction, a section of trenches and a Republican army shelter from 1938 have also been uncovered.

This collection of pens, which are now in ruins, are located on both sides of a beautiful, cobblestoned livestock track. They are located on the left bank of the watercourse, on a spur of the Rossa.
Until 1609, part of these buildings were houses inhabited by the ‘moriscos’ from Almoxarca (or Almaxracà), who cultivated what is now known as the Bany Orchard. Once the Moors were expelled, these buildings were left uninhabited and were turned into livestock pens. Eslida thus became part of the transhumance network, which remained active in the area until the 1970s

Eslida was evacuated in 1938 due to the advance of Franco’s nationalist army. The front was stabilised in the following months due to the outbreak of the Battle of the Ebro, and Eslida remained in no man’s land. In other words, both armies – the Nationalists and the Republicans – were present in the area’s mountains. We can find remains of the Republicans’ XYZ Line, which was created to slow the nationalist advance towards Valencia and represented a centre of resistance of the rebel army in the Cocons area. In recent years, the Town Hall has made a notable effort to recover and showcase the heritage of the Spanish Civil War in the areas of Cocons, Fosques, l’Oret and Molí d’Aire.

There are various caves distributed around the town, with up to 50 caves officially catalogued by the Castelló Speleology Club. The most noteworthy caves are Oret cave, Ferrera cave, Fonillet cave and Matilde cave; the first of which contains Copper Age funerary remains, as we have mentioned before.

The town’s typical dishes include the olla de pueblo stew, whose ingredients vary depending on the time of year; arroz caldoso (brothy rice); and the mountain paella. It also boasts a wide range of typical pastries such as orelletes amb mel, dried fig fritters, coca escudellà, coca malfeta, cristines, rotllets, rosegons, pastissos, etc.
Due to its orography, Eslida has been a popular cycling destination for many years, and passing cyclists have been a good source of income for the hotel and catering industry in Eslida and the entire Sierra de Espadán mountain range.

In the heart of the Sierra de Espadán Nature Park, of which Eslida is part and houses its interpretation centre, you can find more than a hundred species of birds belonging to thirty different families. The cork oaks and pinaster pines forests, the understory areas with their rich Mediterranean shrublands, the humid and wild ravines and the abundant fountains (such as Fosques, Matilde or Castro ones), the orchards, the drylands and the rocky areas, make up a mosaic ideal for birds, among which the forest species stand out and, especially, the diurnal and nocturnal birds of prey.

Subscribe to our newsletter to receive offers and promotions.

© 2021 All rights reserved | Website development by Virtulea
Scroll Up